A creek turned green—off the beaten path in Bangkok

Everybody Needs a Good Slap: The Real Wake Up Call You Need When Traveling

Everybody — and I do mean everybody — needs a good slap.

After a 12 hour flight to Japan, the impending (and equally long) layover was well worth the cramped legs and famished tummies we were left with after our United Airlines flight. The bread rolls and margarine, which were about as appetizing as what I’d imagine food to taste like in Guantanamo Bay, only helped build our appetite and excitement.

Osaka exceeded all expectations, and jet lag probably only adds to the amount of bewilderment and amazement one may experience when first entering the downtown of Osaka.

Osaka is a colorful, vibrant, young, extremely trendy, slightly wacky, and incredibly clean city. The Japanese in this town are some of the most fashionable people I’ve ever seen. The styles are progressive and reminiscent of a European city, but with an Eastern twist.

The height of my awe occurred at the 2nd floor of a Starbucks, as I was drinking a green tea matcha frappucino. This Starbucks was actually more of a social gathering of 176 young Japanese hipsters, and the people watching was top-notch. As I sat there in attire far more suitable for Southeast Asia, I was able to really take in the dynamics of their culture and experience a typical day in the Dōtonbori district.

The entire day I saw only five foreigners, which made me like the place all the more. Additionally, I wonder if the lack of foreigners is connected to the the fact that the Japanese speak very limited English. No one we met spoke more than a few words.

With their fancy toilets, pristinely clean sidewalks, and massive billboard advertisements, the Japanese culture is one to experience. The sushi is obviously exquisite, and the shopping (if that’s what you’re into) is world-class.

As the layover came to an end, the next stop was Bangkok, the landing base for most travel to Southeast Asia.

It was here, on day one, where I experienced my magic moment. These are the type of moments that bring me back to why I even started my Freedom Lifestyle in the first place.

No matter what you’re doing in life; whether you are traveling, on a day-trip, or just experiencing something new—a good slap to the face doesn’t hurt. In fact, I believe it’s completely necessary.

Now you may be wondering, “what the hell does he mean by that?” Do I mean it metaphorically, or literally? Well, that depends on you and how you’d like to receive it, to be honest. :)

You see, a good slap can come from yourself, but it can also come from a good friend. A good friend is the one that’s there with you saying…

“This is it. This is life right here! We need to be present and enjoy this to the fullest, hold nothing back!”

Now wake up, and don’t take this sh*t for granted.

My slap and magic moment came during the difficult task of attempting to find and explore the beauty of Bangkok’s lesser traveled roads. Being a massive tourist destination and huge, developed city, meant it was a bit hard to get off the beaten path. But opting to walk rather than hop in a cab or the BTS Skytrain meant all paths were options waiting to be taken.

As we walked along a railroad next to a creek for a few miles, getting stares from the families living along the water in homes made from raw metal scraps, we knew we were on the right path.

As the scorching Summer heat began to takes it toll, we discovered a small family that had converted the front of their home/garage into a space for locals to gather and watch Muay Thai and drink a beer. Bingo, bango, bongo.

The ice cold (literally, they serve it with ice here) Singha beer and atmosphere was priceless. The family was extremely generous and treated us like royalty, which was the complete opposite of the general tourism and hospitality population that deals with thousands of tourists daily. Here, I finally felt like a traveler; and here, I finally got my slap.

The journey has begun…

As of today, I have been to Osaka, Japan; all over Bangkok, Thailand; and a night train and five hour ferry ride (yes I did get sick) to Koh Samui. So far, finding a decent, free Wi-Fi connection has not been an issue, and I’ve been able to keep up on all my projects and business-related activities.

Managing this from abroad will not be easy. I know it will take dedication, and that’s why it’s important to stay connected as I travel.

The travel bug is full on engaged and being treated. This trip will be at least 3 months, and I plan on exploring Northern Thailand, Laos, and Cambodia, at the very least. I’m currently on the island of Koh Samui, where I spent the day on a motorbike touring the entire island, and found some pretty incredible sights along the way.

The island is pretty popular, and therefore full of tourists, so I’ll be hopping over to Koh Pha Ngan next, followed by Koh Tao to get my scuba diving certification. I also find myself on the island right around the full moon, which is in just a few days, and will be on the party island in time for it.

It’s still not certain whether I’ll join the 40,000 completely wasted neon-colored party kids, or look for a party on the island that may be more suitable to my style. Maybe I’ll even be able to have a conversation with someone. :)

Photo: Off the beaten path in Bangkok—CC License

2013-06-20
+Arman Assadi
Previous: The Travel Bug: How You Know When It’s Time to Travel
Next: 3 Proven Ways to Maximize Your Productivity While Traveling 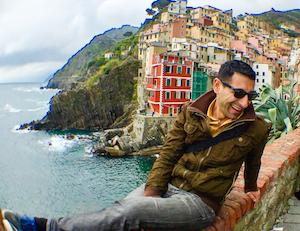